Taranis QX7 Full Review 2020: What They Don’t Tell You 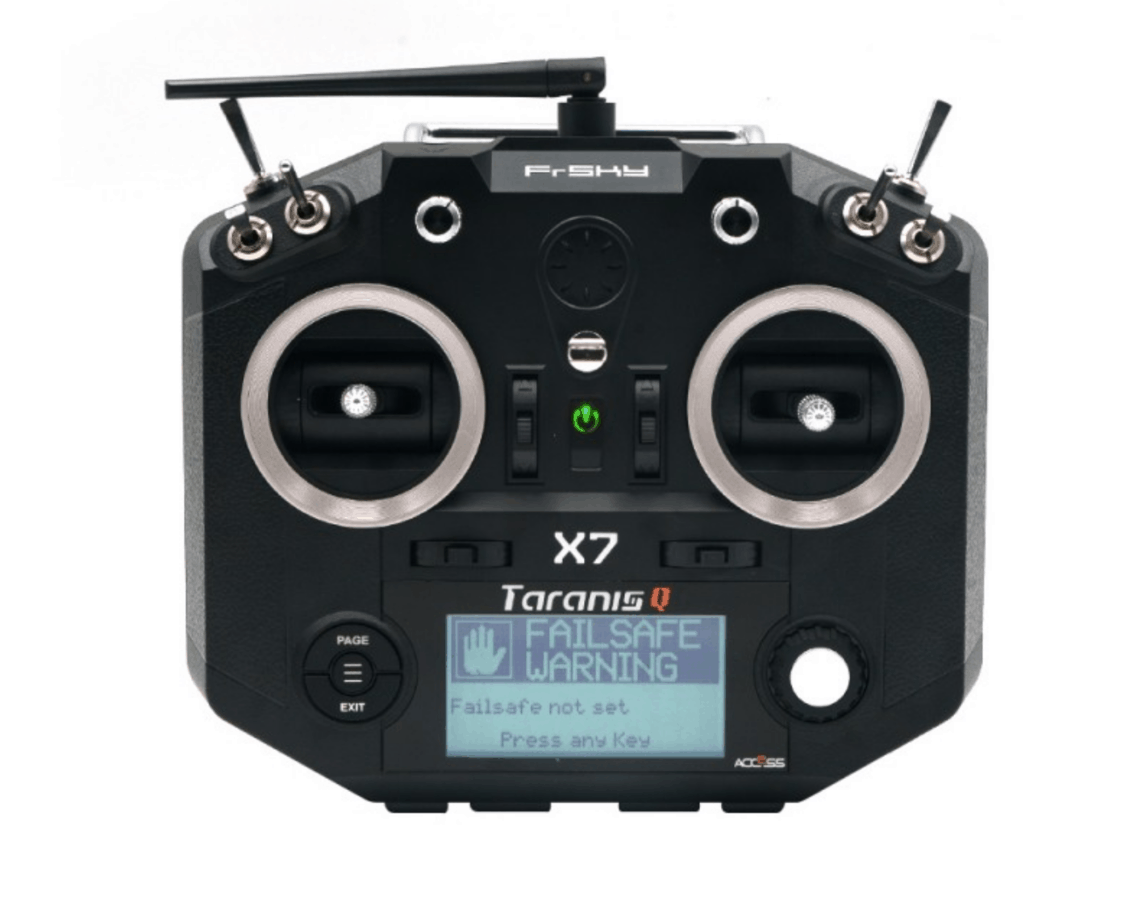 
The Taranis QX7 is a popular drone transmitter which can be used to control lots of different FPV drones. It’s great because it’s not limited to ONE drone.Â

Most drones you buy are limited because the transmitter is very basic, and can only really control THAT drone. At some point you’ll realise you’re outgrowing it and you need a bigger, better transmitter or controller.

The Taranis IS that better controller. The QX7 is a great choice for your first BIG serious transmitter for a number of reasons, and if you’re here, you’re likely already at least a little bit interested in it. There are a couple of issues with it though, which I’ll go over later in this post.

What is the Taranis QX7?

It’s actually fairly big compared to smaller drone controllers that come WITH the drones. It’s going to need batteries and a neck strap to properly use it, and you can get rechargeable batteries (We’ll cover that later). If you’re not used to bigger transmitters, the QX7 is going to feel like a big change.

But that’s not a bad thing, and if you’ve been practicing in your simulator properly, you’re ready for that change! Drone flying is all about breaking through plateaus, and this transmitter is the next step for a lot of people.Â

How does the Taranis QX7 work?

It works by transmitting radio waves to and from the drone (or whatever you’re controlling) and it’s receiver. It can be updated, changed and customised, and there are LOTS of settings you can change manually if you want to.

You can for example, change how fast you’re flying the drone, the range, what tricks it can do and even settings like turtle mode and things like that. (Turtle mode is where you’re able to flip a drone off it’s back by reversing the direction the propellers spin for a short duration).

Which drones can the Taranis control?

The Taranis can control drones with the receiver that matches it. This means if you get the Taranis QX7 it can probably control most drones. If it CAN’T control yours, you can even upgrade it so that it can, using something known as a ‘module’.

A module is a tiny chip that plugs into the controller, letting it talk to whichever receiver your drone has. For most people, we’re flying on FRsky which most Taranis controllers can work with.

IMPORTANT: The Taranis can’t control EVERY single drone out there. Each drone is built differently, with different parts, receivers and so on. You’ll never get a transmitter that can control EVERY drone. That being said, it’s going to control MOST of the racing drones you can buy online.

Which batteries does the Taranis QX7 take?

It takes about 6 AA batteries. This can get annoying, and I’ve found that it REALLY runs those batteries down fast. I don’t know why, because other transmitters I have like the BETAFPV stock controller, don’t have this issue and are easy to charge.

For some reason though the one I tried just ran down the batteries really fast, and so I bought rechargeables. I’m not sure if you can use rechargeable batteries with every Taranis, some of them don’t advise it, so check with the seller first.

But I’ve been able to use rechargeable batteries like these with my Taranis QX7 and they seemed to work just fine. Be careful you don’t use it if they’re not fully charged though or you’re not sure how much charge they have!

The reason I can’t put a set figure here for the range is because it depends on the receiver on the drone. If you’ve got a basic receiver on your drone then it doesn’t matter so much about the range of the transmitter because you need both things to have long range.

So for most people with most default racing drones, your range will be about 100 metres in any direction, sometimes 150-200m. You can MASSIVELY increase this by using a long range module and a good receiver on the drone however, as well as proper antenna usage.

Getting the Taranis over a smaller controller?

Well, this is a choice that’s down to personal preference. Some people say that the Taranis is the only option for serious FPV drone racers. I’d say it depends on what you’re flying. If you’re just flying small indoor drones like BEta65, then the stock BETAFPV transmitter is MORE than enough for that.

If however, you want to be flying bigger and better drones, then you’ll want to look at something like the Taranis QX7 for sure. If you’re wanting to create videos like the drone racing and FPV freestyle videos going round YouTube, you’ll need a bigger and better controller like the QX7.

The best thing to choose for a beginner

Problems with the Taranis QX7

There have been a couple of things I’ve noticed that could be annoying about the Taranis.

What’s good about the Taranis

All of that being said, there are lots of things that are really good about this transmitter. In no particular order, here are the things I LIKED about the Taranis QX7.

The range of the controller is actually really good. With certain setups people have been getting up to 600-650 metres, and even further with a longer range module. So that’s more than enough range for most of us.

I’d suggest not flying where you can’t see (or have someone next to you see) otherwise if you do crash you won’t have any clue where the drone landed. or where it was flying to. This will save you lots of time and money when finding crashed drones.

Straight out of the box with most drones, the range of the Taranis will be about 100-200 metres, roughly the same as the DJI Spark.Â

Of course the Taranis has MORE features than most transmitters. It certainly has more features than the basic controllers you can get with most drones. It’s for professional flyers and pilots. That’s probably why it’s so expensive and difficult to figure out!

If you’re just getting into flying as I’ve said in many posts, start by learning on a drone simulator and then move onto something like the Redpawz r011 drone. It will save you so much money in the long run!

In terms of features, I won’t go into detail on exactly what it can do, because you can read all of that here. I’d rather give you a personal account of what it’s like to own and use. That being said, you’ll find over 15 channels on the Taranis. It can also remember the settings for up to 60 models (drones).

The input is about 6v BUT you can convert it to take a rechargeable lipo battery, which I would HIGHLY recommend. You’re going to go through batteries very quickly if you don’t find a rechargeable solution for powering this.

Because this is a full transmitter solution, you can customise it. That means you can add or remove modules and settings, to make it more compatible with your particular setup. This saves you time and money. Instead of having to buy an entirely new transmitter for each drone, you just connect it to ONE; the Taranis.

You can also add modules if your drone is not compatible to make it work. The most annoying thing about drone flying is eventually you get to own a huge stack of drones and controllers, and it all takes up space and uses batteries.

By having one controller that work with everything, you save space and money. It might cost a lot to get setup and actually BUY a taranis, but once you’ve got one it’s going to make life easier.

Should you get a Taranis QX7?

Well, the answer is NOT always yes. You see the Taranis QX7 transmitter is not for beginners. If you buy it before learning how drone flying works, like I did, you’ll get confused.

I got so confused when I first got it, and I just couldn’t figure it all out. There’s such a steep learning curve with racing drones. You’ve got to learn how to fly and control the drone, then how radio signals work..

I was confused even by the binding procedure at first. So if you’re just getting started, consider getting an easier setup.

The easiest FPV setup I know of right now is the Redpawz r011 or the Beta65 and their stock betaFPV controller. They work pretty much out of the box, and you don’t need to go through long complicated settings.

The only thing is they’re not big outdoor racing drones. Make your choice but please consider learning on a simulator first, it will save you SO much money over the long run! Then when you feel confident about flying a bigger drone and using a Taranis, you’ll be ready.