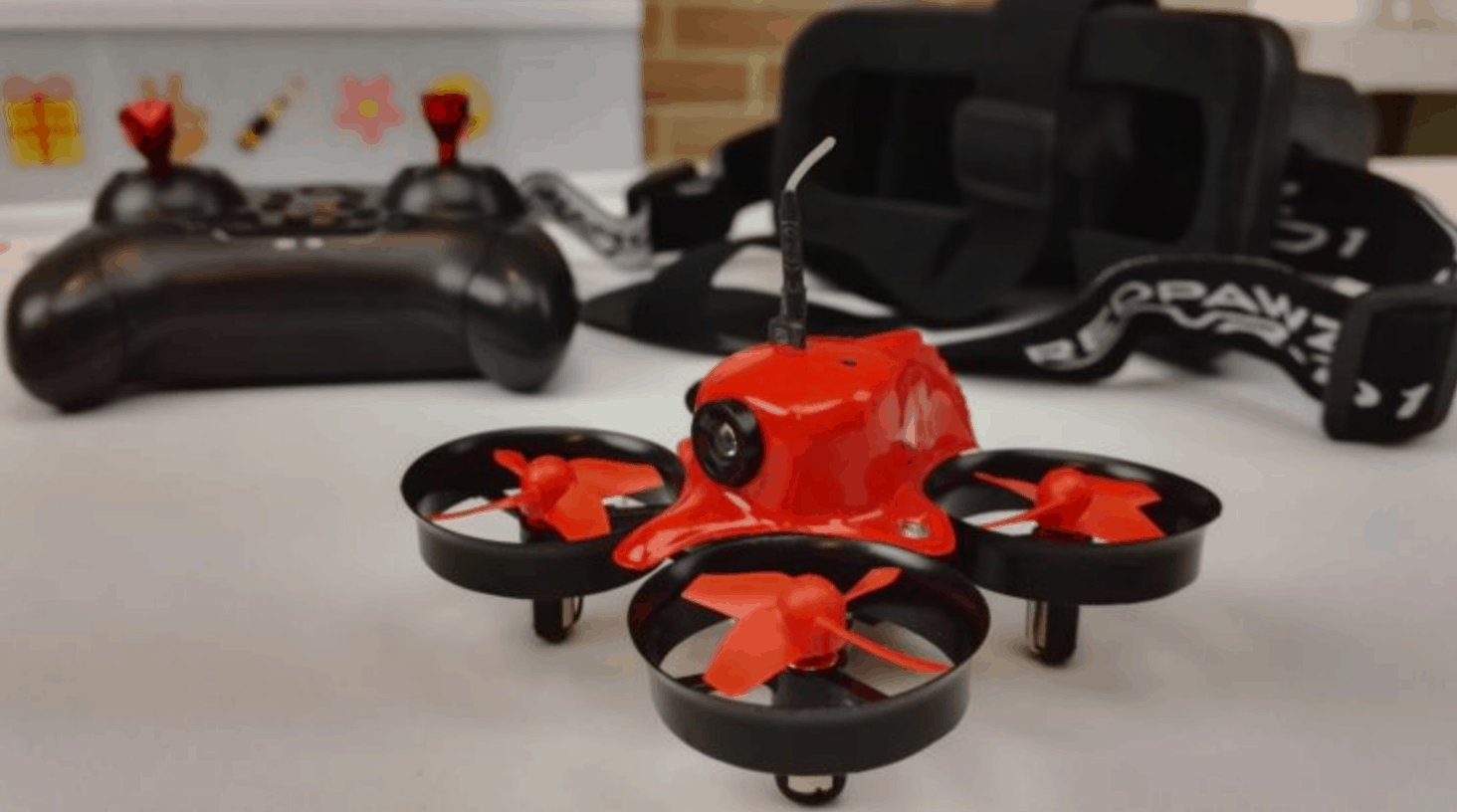 
UPDATE: The Redpawz R011 is no longer available. Check out this newer, awesome brushless micro drone instead.

The Redpawz R011 is a tiny little FPV drone sold online, usually on Amazon. It’s a GREAT flyer, and I’d like to explore a few things I’ve learned while flying this drone as my FIRST FPV drone, for over a year.

It’s actually been a lot more than a year, but I couldn’t remember the exact date I bought it and I didn’t want to make the title something weird like ‘review after using it for 1 year and 3 months’.

Actually, for those who prefer watching something, here’s a review I did of the drone showing everything you get, how it works etc:

What is the Redpawz R011 drone?

It’s a fully functional FPV racing drone. Actually, it’s not much of a racer, because you can only really fly it indoors, but you can certainly tear it around your house EASILY. It can go from one room to any other room of your house (unless you live in a MASSIVE house).

There are a few hacks and tricks I’ve used to get better range on this drone, and a few battery hacks which I’ll get into a bit later, but for now, just know that the Redpawz is a great FPV drone for a beginner drone pilot. 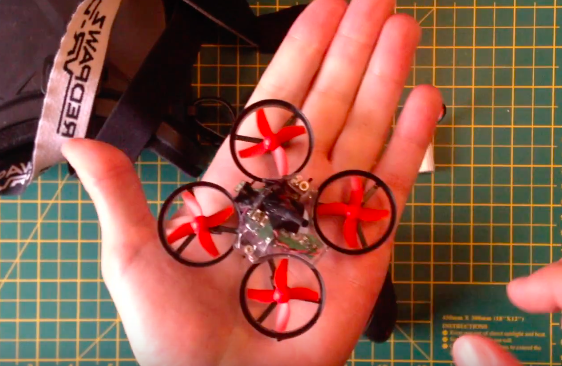 Why it’s so good for beginners

There are lots of budget drones on the market. Most of them are line of sight, meaning you have to SEE the drone in the air and work out which way it’s pointing in order to fly it.

An FPV drone however, is different. It’s different because you don’t need to know which way it’s pointing.

You can put on some FPV goggles which let you SEE what the drone sees. It’s like you’re actually inside the drone flying it and it means you can have MUCH greater control over where and how it flies.

This of course takes practice, and you’ll crash a lot at the start, which is why the Redpawz is so good because it’s practically crash proof! You could also learn to fly in a drone simulator if you’re worried about crashing indoors as well!

The drone itself actually has plastic ducts around all the propellers as you’ve seen from the pictures, meaning it’s crash proof. I’ve crashed this tiny drone THOUSANDS of times, into just about everything you can imagine.

I’ve even crashed it into my friends, walls, food, even bushes and things outside. It just keeps on going! Now there is ONE big weakness for this drone which I’m sure you’ve guessed by now..

The one weakness of the Redpawz: HAIR!

Nothing’s perfect, and this drone is no different. There is one BIG problem with this drone. If you get HAIRS stuck around the motor, it falls from the sky. This is actually quite annoying if you’re not sure how to deal with it.

You’re going to be flying this indoors, and indoors there are lots of hairs. Even if you don’t think there is, trust me, there are.

If you’ve got long hair, or if someone in your house has long hair, at some point a hair will get tangled in the drones motors. But even that isn’t a huge problem because you can just take the propeller off and remove the hair.

It really helps to have a set of tweezers and things like that on hand, just for when you crash into hairs! This is a weakness of most indoor racing drones though, the smaller the motors are, the more likely a hair is to tangle in them.Â

BETAFPV make similar FPV racing drones designed for flying indoors. The differences are big though. If you’re considering your FIRST FPV drone, I’d still go for a Redpawz r011, but at some point you’ll want to upgrade to a BEtaFPV drone like the Beta65 or Beta85.

BetaFPV drones are pretty much the same SIZE as the Redpawz R011, but they have a few interesting features:Â

So there are of course lots of reasons to choose a BEtaFPV drone OVER a Redpawz R011, but I’d still say go with the Redpawz if you’re a beginner. A lot of those features are for people who are slightly more advanced and NEED something more.

There is still NO CHEAPER OPTION than the Redpawz for a full FPV set including the FPV goggles. And the goggles you get with the Redpawz are REALLY good! I ONLY use those, even to fly my other racing drones and BetaFPV drones. 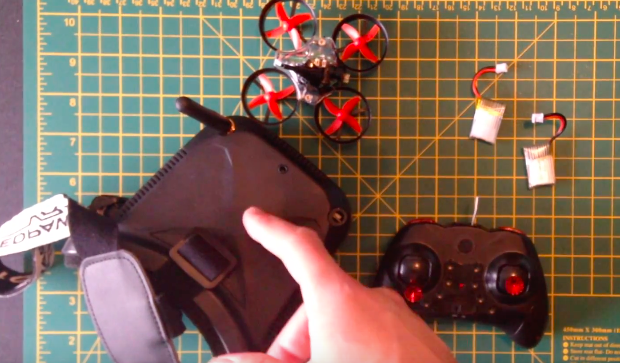 Is it the cheapest FPV drone?

Like I said, the Redpawz r011 is currently (Feb 2019) the cheapest full FPV kit including the drone, battery, transmitter and goggles. You can’t find anything with all of that, for less money.

And that makes it a great product already. But combine that with the fact that it’s actually a really good drone, and you’ve got a winner. It’s no wonder so many people buy this as their ‘introduction to flying’.

Here’s a little video of me flying the redpawz:

The battery life of the r011 is pretty standard. You’ll get about 2-3 minutes of flying from the standard batteries they come with. This is actually more than enough for most people, especially if you buy spares. That being said, it’s hard to find spare batteries for the default port that it comes with.

This means the best thing to do is just to watch a couple of YouTube videos showing you how to change the battery port (trust me, it’s easy) and then you can fly with BetaFPV powerwhoop batteries.

That gives you a better battery life, and means you can more easily buy SPARE batteries. I like to have about 20-30 spare batteries charged up so I can fly for a good session! You don’t want to be flying just for 2 minutes and then waiting 20 minutes for it to charge again!

The battery life of the standard battery that it comes with is actually pretty impressive for the size and weight, and you don’t feel like you’re missing anything. That being said, I always like to upgrade things, except the Spark which was perfect out of the box!

If you’ve flown and crashed this drone, what will happen is the FPV camera will break. The connection on this drone isn’t the strongest, and you can’t blame them for the cheap price. That being said, you can easily fix the camera and solder a new connection or even an entirely new FPV camera on the top.

I won’t go into how to replace the camera here, but you can easily search YouTube videos and find a tutorial that shows you exactly how to replace the FPV camera. I did it in about half an hour after watching a video. And I’ve never soldered anything before that in my entire life.

But you will probably need to learn how to solder a new camera on, because that’s the thing that’s going to break the most often on the Redpawz r011. If you’re worried about that, consider just going straight to the upgrade and getting the following setup:

I’ve flown all of this gear, and I can honestly suggest getting the BETAFPV range. The Redpawz is perfect for beginners but when you crash the drone and the camera breaks, I would either solder a new one or just upgrade to a new better drone.

It depends on what you feel ready for, but I would say just learn to fly in a simulator, then move to a Redpawz r011, THEN move to a BetaFPV drone like the 65 or 85.Â

In short, it’s an awesome bit of kit. It’s light and strong enough that it’s not going to break when you crash it. It’s also affordable, and the FPV goggles that you get with it work better than even goggles 3 times their price.

I was so surprised when I compared their goggles to other more expensive ones, and learned that actually, they’re pretty good! Especially when they come with the drone. Right now the best and cheapest place to get the Redpawz package is here on Amazon.

You might want to compare this drone to other smaller drones like the Beta65 which is what I’d suggest upgrading to once you’ve got the hang of flying.Â

UPDATE: The Redpawz R011 is no longer available. Check out this newer, awesome brushless micro drone instead.