[This post may contain affiliate links to recommended products. That means if you purchase something I recommend through my link, I may receive a small commission. It doesn't cost you anything extra and helps me pay for all the coffee I drink writing these blog posts. So help a brother out if you can!]

How to live stream from a drone

So depending on which drone you have (specifically which drone mobile app you are running), you may already have the ability to live stream from your drone and you don’t even know it!

If you own a DJI drone like the Mavic Pro, the DJI app already has the ability to live stream to YouTube and Facebook. I will cover the steps to set that up below.

If you don’t happen to own a DJI drone, no worries! I got you covered. Live streaming from any drone is possible. You just have to pick from one of the methods below and get to live streaming all that awesome drone footage!

How do drones transmit live video

Without getting too far into the weeds, it’s just plain old fashioned radio waves!

Whether you are aware or not, radio frequencies are used to send all kinds of information from music to wireless internet. Yes, your WiFi is actually using radio waves to stream all those drone YouTube videos to your laptop.

So when it comes to drones with cameras that transmit live video to a your phone or FPV goggles, they are typically using a WiFi connection from your phone to the drone.

If you are running just a phone to both see what the drone sees and to control the drone, then it is just using WiFi. If you are using a phone in tandem with a controller, the controller is typically running on a different radio frequency so as to not be interfered with by the video transmission which could lead to lost drones or worse, crashed drones!

So whether you are controlling a drone with a transmitter or viewing the live video on your phone, it’s all the same technology. Radio!

How to stream video from drone to phone

Streaming video from the drone to your phone requires two things: a camera on your drone (figures huh?) and a mobile app for your respective drone.

Almost every single drone brand that has a camera will have a mobile app for you to not only see where you are flying but also record videos and sometimes even control the drone.

The amount of features that come with each app varies greatly among brands. Some allow for simple video editing and sharing, and some, like DJI, allow for live streaming directly from within the app.

If you don’t own a DJI drone, you can skip on to some of the other solutions, but if you are a lucky DJI drone owner, you’ll be happy to know that it won’t require any special hardware or software to live stream from your drone!

How to live stream DJI drones

To live stream from your DJI drone, we’ll look at the DJI Go 4 app. These are the steps involved:

If you don’t have a DJI drone, there are multiple ways to live stream from a drone without the help of a fancy app!

How to live stream from a drone using a capture card

Using a capture card in conjunction with video streaming software not only circumvents the need for live streaming directly from your drone’s app, but it can also result a higher quality video feed!

You will need the following:

So when you are ready to start live streaming from your drone, you will hook up one HDMI cable from your controller’s HDMI output to the capture card.

Then you will connect your capture card to your laptop and set up your video streaming software to recognize the capture card as the input device. Google tutorials for your specific software if you are unsure how to do this.

Finally, in your software you can set up where you are live streaming your drone footage.

For example, if you are using OBS (why not it’s free) and you want to stream live to YouTube. You need to first log into your YouTube channel and Creator Studio and set up your live stream.

You will get a stream URL and stream key. In OBS, go to Settings and then Stream. Enter your stream URL and key and select the capture card as your source and click “Start Streaming”.

This may seem a little cumbersome but it really isn’t too bad and the quality of the live stream from your drone will be a lot better than just streaming from an app.

You will need to be close enough to a strong WiFi signal or have outstanding 4G with a hotspot (beware the data usage).

You will also need to mind all the HDMI cords hanging off your controller. If you are the type that likes to walk around a bit while you fly, you might want some of these extra long HDMI cables.

If you are looking for a professional set up for live streaming from your drone, this is it!

How to live stream from a drone using dedicated hardware encoder

If lugging around your laptop everywhere you want to live stream from your drone seems like a giant PITA, well that’s because it is. Hardware encoders to the rescue!

Using a hardware encoder like this URayCoder replaces the capture card, laptop and video streaming software all in one neat, little, portable package!

This encoder in particular comes with a mobile app where you set up your live stream whether it is Youtube, Facebook Live or something else.

Then all that is left to do is plug the HDMI output from your controller into the encoder and start streaming!

You will of course need an internet connection, but with just your drone, controller, encoder and a mobile hotspot, you have an ultra portable way to live stream from a drone!

But what if you and your buddies want to live stream from all of your drones while you do a little racing!

Well the same technology can be used but this time with multiple source inputs allowing for synchronized drone footage from multiple drones being live streamed simultaneously!

Using an encoder with multiple channels like this URayCoder 4 Channel, you and three of your buddies could live stream from your drones simultaneously. 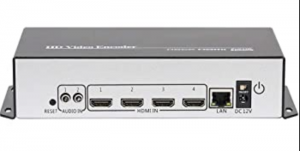 If you want some awesome drone racing footage to live stream to the world, this is the setup for you!

The future of live streaming from a drone

Live streaming from drones is going to explode in the next decade. The aerial perspective will be widespread across all entertainment and sports much like the wire-driven SkyCams.

Even vloggers and social media influencers will be live streaming from their drones in the near future!

As big as YouTube is, Twitch and other live streaming platforms are proving that watching something happen live is always awesome!

So if you aren’t live streaming your drone adventures yet, maybe it’s time to start and be ahead of the curve! And if you are new to drone flying you might want to take the Drone Flying 101 course and practice before live streaming so that you go viral for the right reasons! 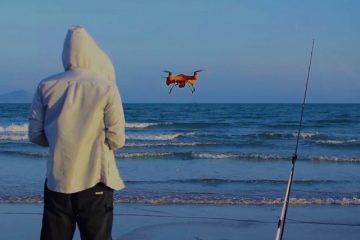 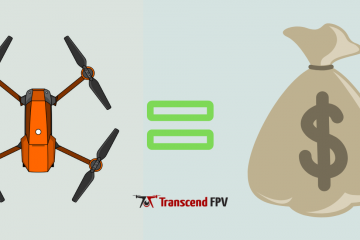 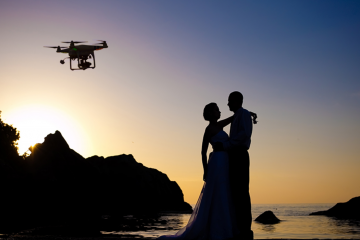